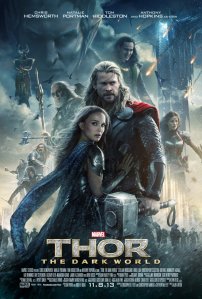 Sometimes being a Nerd of Color is difficult. Often, the sci-fi you watch marries awesome next-gen splatterpunk visuals with horrid White Man’s Burden political sentiments, or the games you play offer wickedly fun three-dimensional gameplay with healthy servings of amoral misogyny and racial epithets. But often it’s pretty easy – each and every Wednesday new worlds reveal the secrets of earthbound metahumans and iron-masked despots and immortal ronin and sentient bacteria and techno-organic telepaths and rubber geniuses and fighter pilots with imagination rings. The comic industry may not accurately render tomorrow, but it can always take you somewhere you never thought you could go.

But let’s admit, the price of the ticket is Whiteness. When most people close their eyes and imagine a Superhero, the vast majority envision a strapping White male, muscular and determined, with steely blue eyes and biceps that can curl Ford pickups. That’s the starting point. That’s what nearly a century of comic art imprints on the Western mind. Even as every other facet of the shared global experience publicly acknowledges non-European populations’ economic and political contributions, the American comic industry and its burgeoning film components routinely place the same pale Olympian specimens on the power fantasy as global hero altar. Millions of people pay to watch sweat bead under a stringy, half-braided blond mop while a bodybuilder bleeds under a scarlet cape, writhing in agony below an unforgiving world’s cloudy grey sky, the treachery of his wayward trickster brother foremost in his thoughts.

I watched two young women in the audience for a local showing of Thor: The Dark World. These portly, pockmarked brunettes guffawed at every tasteless joke, swooned with every Chris Hemsworth half-smile, and embraced the silence of attraction whenever Thor exposed his shirtless glory. You could pen a long treatise on the tyranny of conformity these images promote, you can YouTube a discussion on the irresponsible corporate socialization inherent in selling a film about a White male god who runs around planet Earth hammering foes into submission, but none of this will change the heady lust in those girls’ eyes. That gaze is uncritical of Thor’s geopolitical implications, his brazen sexism, even his indifference to high school physics. Hell, that gaze could care less that the movie sucked! Taut muscle, metallic spandex and Australian features sold admission. The obvious objective of Thor: The Dark World is capitalist: sell as many movie tickets and as much official memorabilia as possible. All of it — the sweaty masculinity, the computer-generated effects, the human deer impersonation Natalie Portman called acting, the annoying Kat Dennings camp – contributes to that objective. The end result was a terrible forced lobotomy of a movie, devoid of narrative coherence, enjoyable characters, and compelling visuals. Thor: The Dark World is, quite possibly, the worst thing Marvel has ever done.

And I can’t imagine what would improve about that film if they made Thor Black. 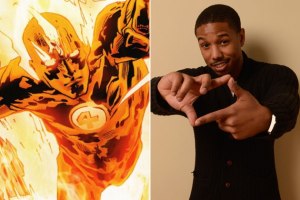 No, to my knowledge that’s not scheduled for Monday morning’s development meeting at Marvel Studios, but after reading Justin Aclin’s I’m Sick of White Dudes, it’s what came to mind. In response to the sneering fanboys who lamented news reports that discussed Michael B. Jordan’s possible casting as Johnny Storm in an upcoming Fantastic Four movie, Aclin ably deconstructs the notion that filming Johnny Storm requires a Whites-only casting call. Whether needless traditionalism or barely-concealed bigotry, Aclin rejects the static thinking that encourages some comic fans to express disgust when their beloved comic heroes are interpreted on screen by actors of color.

I understand the sentiment. I understand the desire to offer a counterpoint to those who argued against Jessica Alba as Sue Storm, who gurgled dismay at Idris Elba’s Heimdall. But Aclin’s writing left me cold. At one point, Aclin argues in italics, “There is nothing about the core Human Torch’s character that precludes him from being Black. At all.” But I’m not sure what we gain if we inject melanin into previously de-racialized superheroes to tell those characters’ stories in darker hues. If anything, Michael B. Jordan’s work on Chronicle offers the best evidence of what he could accomplish as Johnny Storm; the actor was more than compelling as the charismatic big man on campus in that film. Still, Jordan’s probably best known for his work on The Wire, Friday Night Lights, and the landmark Fruitvale Station, in roles where his character’s racial identity impacts life choices. 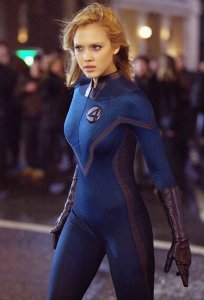 Can you see me now? OK, how about now?

Given Aclin’s argument, we should be eager as comic fans to allow actors of color to portray superheroes designed when Whiteness was default in the comics industry, as if the actor’s skin color has no impact on the character’s core identity. This logic only works if the writers involved use melanin for palette swaps, and write the same de-racialized characters we’ve seen before. That’s not progress, it’s regression. It’s also contrary to the lived experiences of people who’s melanin affects their lives, fortunes, and sacred honor with every passing second. Sure, the studios can use a Black actor to portray the carefree, high-flying Johnny Storm, but let’s remember that Storm’s core character reflects a fundamental indifference to consequence that many African American men today could not reasonably share.

Sword of Omens, give me sight beyond … oh, wait …

Diversity can’t be a wonderful opportunity for new social interaction and nuanced storytelling at one moment and completely without importance the next. What’s more, Aclin recognizes this: much of his piece centers on his interest in something new from a comic industry that so often serves fans superheroic White men, and his desire to support writers who explore human difference with characters that fall outside that paradigm. I simply do not agree that color-blind casting for superhero movies advances this cause. Jessica Alba’s Sue Storm never reflected upon any discernible Mexican heritage, and Idris Elba’s Heimdall never gazed upon Sierra Leone. In the most public examples of color-blind superhero movie casting in recent memory, nothing about the chosen actor’s race affected anything. How does this advance diversity in comics exactly? This is not Paula Giddings’ When and Where I Enter, this is crass tokenism, designed to quiet the murmuring against the comic industry’s monochrome reality.

Look, I get the fatigue – The Avengers was as diverse as a North Carolina Woolworth. But the people who are ‘sick of White dudes’ fail to consider the extent of their requests for visible racial and sexual diversity on a comic industry designed by straight White men for straight White men. Superhero comics thrive on continuity, not complex drama or beautiful language. The core comic book fan actually wants today’s Captain America story to reflect some coherence with the character as written ten years prior, with the same recruitment poster ethics and unblemished features. The point? Comics are too simple, too infantile, too immature for writers to apply critical race theory and third wave feminism with palette swaps within their pages without sacrificing the logic of the worlds in their panels. When they try, crass tokenism and poor storytelling almost always results. Aclin’s correct: nothing precludes Johnny Storm from being Black. But to ignore over fifty years of comic book history and nostalgia to render a Black Johnny Storm on screen requires a stronger argument, one that both respects comic book history and its core fans, and most importantly, the African American experience. Crass tokenism does neither. It’s an infantile solution for a childish medium. 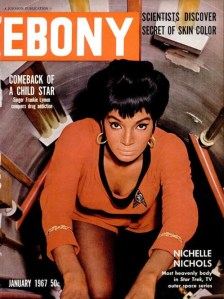 And it’s unclear who benefits from that solution. I understand that the I’m Sick of White Dudes and the Don’t Be Riker crowd desire to excise White masculinity from popular culture, but that’s neither realistic nor helpful. Who benefits? It’s not as if some powerful social barrier or racial paradigm shift would be achieved by Michael B. Jordan’s portrayal of a brash science experiment victim. People who support every actor of color or new minority character in comics mistakenly pretend that these images offer oppressed populations some intangible social justice, as if one can battle institutionalized White supremacy with colorful art and casting calls. It’s ridiculous, Gerber thinking. Heavyweight demigods in scarlet capes can reduce all opposition to rusty nails; adults in the real world should remember that Michael B. Jordan’s next job will have no effect on the incarcerated African American millions forgotten by our nation’s tough-on-petty-drug-addiction policies, or the suburban populations who convince themselves that diversity is a social good, so long as their brilliant little angels face no affirmative action opposition as they matriculate to a four-year university. Yes, entertainment can have some social impact, but every Negro in a sci-fi movie is not Nichelle Nichols or Whoopi Goldberg or Dr. Mae Jemison, who proved that our imaginations and our realities can allow for Black people in space. It’s petty and obnoxious to oppose color-blind casting to avoid forty years of American integration within literary White male power fantasies, but it’s also off-putting to insist that actors of color portray historically White characters as if superhero forced busing approaches moral respectability.

The solution? New stories, new characters, and above all else, new talent! When the comics industry encourages people of color to write, draw, ink and edit their experiences and imaginations, everyone benefits. Sometimes we’ll be offered new characters of color. Sometimes not. But if diversity in comics is a laudable goal, then let’s not shortchange the comics medium by grafting melanin without meaning onto existing properties. I’ve no excitement towards Kamala Khan, the proposed new Ms. Marvel, because all existing information about this character leads one to reason that the same old save-the-innocent-Muslim-girl-from-traditionalist-tyranny tropes will find expression in her stories. Plus, I’m an adult, and could give a damn about yet another “angst-ridden teenager with powers” narrative. But whether through homage or lazy storytelling, will we still be presented with a fourteen-year-old Pakistani girl who idolizes blond femininity? We can’t yet know. What we know now is that Marvel did not trust themselves or their audience enough to create this character without injecting her into the existing Ms. Marvel mythos. Like Jason Rusch as Firestorm, or Cassandra Cain as Batgirl, the character’s melanin provides seasoning to already flat, flavorless comic properties, like extra cumin for a bland entrée. I’d rather excite my palate with well-written, complex, intelligent comics than watch Marvel and DC stretch spandex over melanin and call that diversity.

Because really, what Black man do you know who’d feel comfortable wearing a skintight blue leotard with the number 4 on the chest in the heart of Manhattan? Brothers have been stopped and frisked and worse for less.