The Sisko, Part One: Our Living Black Manhood

When I was a teenager, I liked to skip church.

My parents attended different Baptist churches in my hometown, vibrant, bright places of worship where suburban Blacks developed a respectful, life-affirming, joyous relationship with a living God. Each Sunday meant uptempo gospel music, dedicated Bible study, and hour-long sermons on the spiritual uplift offered through Christian precepts. This was the Black church: fine clothing, expensive hats, smiling children, gaunt deacons, relaxed tresses, choir robes, public praise, Negro spirituals, religious supplication, spiritual uplift. For my neighbors, for my mother, church was the emotional recharge, the soul cleansing needed before Monday morning’s journey into corporate White villainy. I don’t pretend the same of my father; I always found his belief an extension of his duty to family and country. Still personal, but reserved, stately, imperial.

My mother would sing in church. For years, she gave up her Sundays to care for an ancient grandmother and her elderly son; when the grandmother passed in a tragic hospital fire, my mother’s return to the church jumpstarted her perspective. She learned to smile again. Church meant community, friends, gossip for the jealous, and prayer for the troubled. For me, church was ostracism. I loved science fiction and comic books — Jean-Luc Picard and Jean-Paul Valley — and my irrepressible skepticism toward Biblical stories reaped disapproval from peers and adults alike. Church was high drama and high emotion; weighty secular concerns like systemic poverty and environmental racism did not, in my opinion, respond to the power of prayer. So I skipped, usually by taking so long to prepare myself on Sunday mornings that waiting for me risked tardiness, and watched new episodes of Star Trek.

That’s when I met Benjamin Sisko. On a Sunday.

Single father. Accomplished commander. Religious icon. Moral pragmatist. In 1993, as Star Trek: Deep Space Nine premiered, I did not know what to expect from a Black commander of an abandoned Cardassian space station, moored on the outskirts of Federation space. But watch “Emissary,” DS9’s series pilot. Very quickly, the viewer endures senseless murder, determined fatherhood, and most surprising — Black rage. There are precious few moments in Trek history where Captain Jean-Luc Picard of the U.S.S. Enterprise appears visibly shaken, but the inaugural exchange with Ben Sisko counts. You notice more than the tension between idealism and pragmatism, between manicured expectation and harsh reality, in the scene’s debate over the Federation role in Bajor’s future. 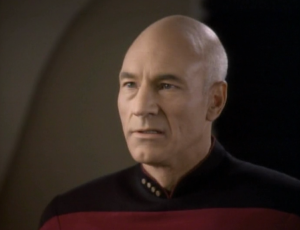 Ben Sisko’s angry — Picard’s blood debt is not forgotten, rank be damned. Notice Sisko’s stare: harsh, unyielding, indifferent to the Earl Grey liberalism that promotes Bajoran admittance to the United Federation of Planets without spending time on the ground to prepare their politics. It cannot be understated — Ben Sisko is a case study in channeling rage toward productivity. As a man he must confront and conquer loss in a gilded future where humans rendered poverty and tragedy and terrorism extinct long ago. His origin testifies to the failures of Roddenberry liberalism to defend innocence against absolute evil — a failure of paternalistic White hegemony.

With Picard, personal reserve maintains authority; with Sisko, personal control exudes authority. Benjamin Sisko personifies authority in several dimensions on Deep Space Nine: he is an arbiter of justice, military commander, and dedicated father, always finding time to play baseball or sail an ancient Bajoran spacecraft with his son, Jake. Fatherhood matters here. Looking back, I can remember watching episodes of Deep Space Nine with my father, catching him on sporadic Sundays as he returned home after four straight days of twelve-hour shifts processing polystyrene monomer for a multinational chemical conglomerate. I angered my mother by indulging my atheism, but my Dad would sometimes smooth that over, and after she left with my nieces we’d watch DS9. Dad always jokingly derided Star Trek as “my generation’s westerns.” As an adult, I don’t think he’s wrong. My father loved westerns, grew up watching John Wayne in John Ford vehicles, and generally adored the conquering the frontier, six-gun justice, reluctant warrior archetypes native to the genre.

Mostly though, I think I saw my father in Ben Sisko. There exists an unrepentant Black manhood, designed to teach youth from the darker nation how to live in a world designed to benefit others. This is masculinity written in moral absolutes where emotion is what you control to logically consider how best to help your family. Mistakes cost blood; survival demands a “twice as good” perfection that must be trained. Ask Michelle Alexander. Where we’re from, consequences include the nightstick and the chokehold. Jake’s relationship with his father paralleled my relationship with my father: we are not friends. We could be cordial, polite, even friendly. But we are not friends. I don’t know how other families in other cultures handle father-son dynamics, but my father was not my buddy. He wasn’t absentee, nor was he the fun-time guy who played catch to relieve my boredom. My father drove me to band practice in a sweltering August at 14 when I resisted because as a parent, that’s what you do. Feelings are not important. We don’t hang out. He’s my father, and I am a man because he showed me how to be one.

My father’s respect for family, for religion, for the intellect’s utility — this is the manhood I recognized in Benjamin Sisko. Tempered in sacrifice, honed by sheer will, Black men like my father and Ben Sisko keep fighting when hope departs, and keep teaching when circumstances darken. Further, these Black men never let anyone avoid their color. My memory recalls episodes where Sisko and crew travel back to Earth circa 2024 to engage in class warfare that ensures the creation of the Federation; episodes where Sisko believes himself a Black science fiction writer in postwar America, desperate to publish a story about a Black space captain despite the audience’s virulent anti-Black prejudice. In another, Ben Sisko openly derides Kasidy Yates’ participation in a scheme to help 60s’ Las Vegas lounge singer Vic Fontaine retain control of his bar, and cites rampant American race prejudice to justify his perspective. On. Star. Trek. Ben Sisko boycotts the holosuite diversion his entire senior staff and son adore, because he refuses to whitewash racist history, and discards science fiction’s hollow political limits the way Zefram Cochrane shatters sub-light space travel.

And I skipped church on Sunday to watch Ben Sisko, the Emissary of the Prophets. Irony.

Ben Sisko’s evolution from skeptical scientist-explorer who makes first contact with “wormhole aliens” to the fully realized Emissary, who defends Bajor from threats outside of corporeality or linear time, should not have worked for me at 16, when I was reading Nietzsche’s Thus Spoke Zarathustra and playing Marilyn Manson’s Mechanical Animals nonstop. I was the Black boy who rejected the God of my father, the God of Abraham, Issac, and Jacob. To a palpable degree, I turned my back on Blackness as a result. Christianity’s ubiquitous in the South; to claim the label atheist is to unmask as alien as any Gamma Quadrant denizen with horns for a beard. But looking back, I believed Sisko because I understood the trajectory. Many of us once known by the DuBoisian moniker “Talented Tenth” spend most of our lives in preparation for the academy, where Western philosophical thought questions the nature of God and man without regard for mainstream popularity. Once we enter, we collide with the cosmopolitan secular humanism prevalent in American higher learning, where religion is at best quaint and usually a mild mental illness. Science fiction loves that. Ask yourself how often religion on Star Trek: The Next Generation amounted to quasi-Buddhist meditation with lit candles and mood lighting — Worf’s long wild hair framing a harried and bony brown brow, Riker comically interrupting as if it’s not important.

And we are still Black! We’ve seen the tearful brown mothers who pray over wounded sons, visited frightened high school linebackers whose X-rays display catastrophic spinal damage after one bad practice, attended funerals for cancer survivors and baby showers for cheerleaders. We’ve seen our community replenish itself through faith. For Benjamin Sisko, a Black man of the future, to spend so much of that imagined time reflecting on race justified for me his gradual acceptance and respect for Bajoran theology. Sisko understands that a human response to suffering cannot always be cerebral, that communities unify though shared precepts, that ritual and supplication and prayer do not betray backwardness or ignorance among those with dirty fingernails on skyward hands.

Thus we recognize The Sisko’s brilliance: his Blackness is the lens through which we view the prejudices and philosophies of that frontier future and our fractured present. In the character of Ben Sisko, Black manhood combats revolutionary insurgents, genocidal shapeshifters, and false alien gods, all to question geopolitical ethics, just war theory, and the nature of God. Star Trek, at its finest hour, centered its most expansive artistic gift around ascendant Black manhood: complicated, commanding, and utterly human.

So no, I don’t feel so bad about skipping church.

The Emissary of the Prophets.

— Originally published by the author at The Nerds of Color.